Indian Classical Music has always been for classes rather than masses irrespective of economic status. Even religious festivals play Bollywood songs, local language movie songs; as they appeal to the listeners and are constantly played on radio. Bansuri Foundation nurtured Baithak from its inception, as it aimed to take Indian Classical Music to all.

Baithak organised live concerts at low-income schools to create an awareness and interest in Indian Classical Music among school children. Most students were completely engaged during the performances and were eager to know more about the art forms. They interacted with the artists, asked questions and clarified doubts. Aside, one of the performers said that this had been her most satisfying and fulfilling performance.

Baithak also organised Music Appreciation and Training sessions at the Sunrise community centre and the Deep Griha community centre where children/youth are trained in vocals and instrumental music. This included showing films and teaching deep breathing exercises and ‘Omkar’. Through music appreciation and learning, Baithak team worked on values like patience and silence as these in turn lead to improved concentration, observation and feelings of gratitude.

The Blind Girls’ School, Pune is well known for nurturing talents in visually challenged girls, who in the past have won multiple competitions for their musical performances. The Baithak Trainer worked with 20 students appearing for the advanced level Gandharva Sangeet Mahavidyalaya exams teaching them the subtle aspects of music, which will help them if they wish to make a career in music.

Baithak’s scope of work also included developing content and teaching aids required to teach Indian Classical Music in schools and publication of a set of illustrated books on the lives of various musicians from India. 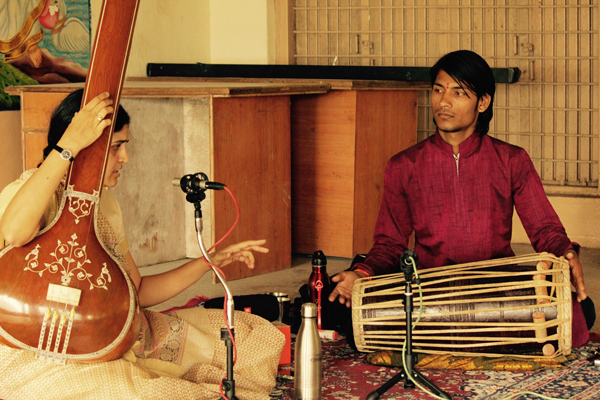 « The Prayatna Film & Dance Festival » Music scholarship
Back To Top